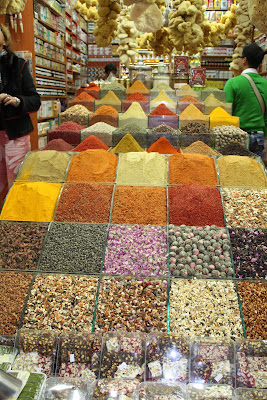 Spice Market Istanbul, Turkey!!
Discover all of the different uses for your spices. Like how to intensify their flavors, store herbs for optimal freshness and how to double a recipe without over-seasoning.

• Ground spices release their flavor more quickly than whole spices. Ground spices such as ground thyme or ground cumin can be used in recipes with short cooking times or can be added near the end of cooking for longer cooking recipes.

• Whole spices need a longer time to release their flavor. They work well in longer cooking recipes like soups and stews.

• Robust herbs such as sage, thyme and bay leaves stand up well in long cooking while milder herbs like basil, marjoram and parsley can be added at the last minute for best results.

• Rub leafy herbs in the palm of your hand to release the flavor and aroma.

• To double a recipe, increase spices and herbs by one and one-half, TASTE and then add more if necessary. In most recipes one and one-half times the seasoning will be sufficient to provide desired flavor.

• Spices such as fennel seed, cumin seed, sesame seed and white peppercorns may be toasted to intensify their flavors. Simply add the spice to a dry, non-stick, heated skillet and heat until aromatic.

• Whole spices and seeds may be best ground using a small electric coffee grinder or spice mill. A pepper mill or mortar and pestle may also be used.

Allspice... Use with meat, fish, gravy, soup and stew, pickles, spice cakes & cookies pumpkin and squash. The taste of allspice resembles a blend of spices.

Anise... Use in candies, baked goods and pork. Has a licorice-like flavor

Caraway... Seeds Use on breads, especially rye bread; also in cheeses. Has a flavor similar to dill.

Cardamom... Use in curries, cookies & other pastries, breads, and pickles. Common in Scandinavian and Middle Eastern dishes; has a sweet, lemony flavor.

Celery Seed... Use in salads, pickles and relishes, sauces, soups and stews, and on beef. Seeds are sold as whole or ground; also combined with salt for celery salt.

Chili Powder... Use in chili, sauces, curries, Mexican foods. A combination of chili peppers plus other spices, including cumin.

Cloves... Use in cakes, cookies, and candies, ham, sauces, pickles and relishes. Have a strong, spicy-sweet flavor; used whole or ground. If used whole, they are removed before serving.

Coriander... Use in curry, pickles, breads, cakes, and cookies. Small fragrant seeds are used ground or whole; have a slight lemony flavor. Leaves of the same herb are known as cilantro.

Curry Powder... Use in rice, lamb, poultry, eggs, and vegetables; used in many Indian recipes. Curry powder is not a single spice, but combination of several spices such as coriander, ginger, turmeric, fenugreek seed, cumin, pepper, cloves, and other spices.

Dill... Used mainly in pickles, but can also be used in breads, soups, meats, and salads. Also known as dill weed, both the leaves and seeds of this flavorful herb are used to season foods.

File' powder... Use to thicken and add flavor to Gumbo and other Creole dishes. Heat has an adverse affect on File, so add it after a pot of food has been removed from the oven or stove. File' powder is made from dried, ground sassafras leaves. It has a root beer like flavor.

Fennel Seed... Use in pickles, pizza and spaghetti sauces, breads, cakes and cookies. A member of the parsley family, grown for its sweet seeds; has a flavor similar to anise.

Garlic... Use in meats, chicken, seafood, stews, sauces, marinades, salad dressings; used in many Italian and Chinese dishes. An herb related to the onion, used fresh or dried; also has many health benefits and medicinal uses. Its bulb is composed of several small cloves.

Mace... Use in cakes, doughnuts and other baked goods; fish, meat stuffings, and in pickles. Made from the coating of the nutmeg seed; used both whole and ground; has a flavor similar to nutmeg, but with a touch of cinnamon.

Marjoram... Use as a seasoning for lamb, soups, stews, fish, poultry stuffing, sausages, beans and other vegetables; alao in beverages and jellies. Also called sweet marjoram; the leaves are used whole or ground. It has a sweet, minty flavor.

Mint... Use in fruits, desserts, jellies, candies, beverages, and as a garnish. Mint leaves have a distinctive flavor and smell. It's used fresh or dried, whole or chopped.

Mustard seeds are commonly used in pickles, relishes, salads, beets, cabbage, and sauerkraut. Mustard is sold as whole seeds or as a finely ground yellow powder. It has a strong, hot flavor.

Nutmeg... Use in breads, cookies, cakes, custard, pies, desserts, vegetables. Used either ground or as a whole seed, nutmeg has a sweet, aromatic flavor.

Oregano... Use in tomato dishes, pizza, spaghetti sauce; in Greek, Italian, and Mexican dishes. Ground oregano is an ingredient in many types of Italian food. It has a flavor and aroma similar to marjoram, but stronger.

Paprika... Use as a garnish for potatoes, potato salad, eggs, deviled eggs, beef, poultry, salads, and salad dressings. A mild red spice, always used ground; used not only for its flavor, but for its red color.

Black Pepper... Use to strengthen the flavor of meats, poultry, fish, eggs, cheese, vegetables and more. Black Pepper can be purchased as ground or as whole peppercorns. It's best when freshly ground.

Poppy Seeds... Use as a topping for rolls, breads, cookies, butters, and pastas. Poppy seeds have a crunchy, nut-like flavor. It's used as whole seeds; can also be used crushed or ground.

Rosemary... Use to season lamb, beef, veal, poultry, soups and stews, potatoes, and breads such as rosemary focaccia. Small needle-like leaves are used dried or fresh, whole or ground; has a sweet but bold aroma and flavor,

Saffron... Use in rice dishes and other Mediterranean cuisine; used in paella, bouillabaisse, and sometimes in chicken dishes. Saffron is sold as a ground powder; has a yellow color and a slightly bitter taste.

Sage... Use to season sausage, poultry stuffings, veal, pork, meat loaf, stews, and salads. An herb grown for its leaves, used as rubbed or ground; has a slightly lemony taste.

Savory... Use with lamb, beef, poultry, egg dishes, squash, beans and lentils. Leaves are used fresh, or dried as whole leaves; has a flavor similar to thyme.

Sesame Seeds... Use on bread, rolls, bagels, salads, and in stir fry. Sesame seeds are always used as whole oil seeds. Most are used on hamburger buns.

Tarragon... Use to season veal, lamb, beef, poultry, seafood, eggs, salads, dressings, mushrooms, asparagus. Leaves are used fresh or dried, whole or ground; has astrong spicy smell and taste. If using dried tarragon leaves, remove them after cooking, since once dried they will not soften again when cooked.

Thyme... Use in poultry, poultry stuffing, pork, beef, tomatoes, tomato soups and sauces. An herb used both fresh and dried, whole or ground. It has a strong, but pleasant flavor, resembling a blend of cloves and sage.

Turmeric... Use in curries, poultry, relishes, pickles, eggs, rice. A member of the ginger family; an orange-yellow powder with a mild flavor.


Have fun and enjoy adding a little SPICE!!
Posted by The Cundick Family at 2:20 PM 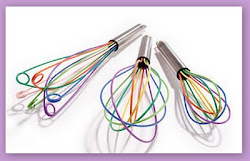 Did you try something ? What did you think?

Never miss a recipe from Whisk US Away!!

Add Whisk US Away to your blog...

we want to hear from YOU!! 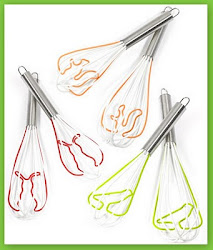 We Have Party Food Ideas 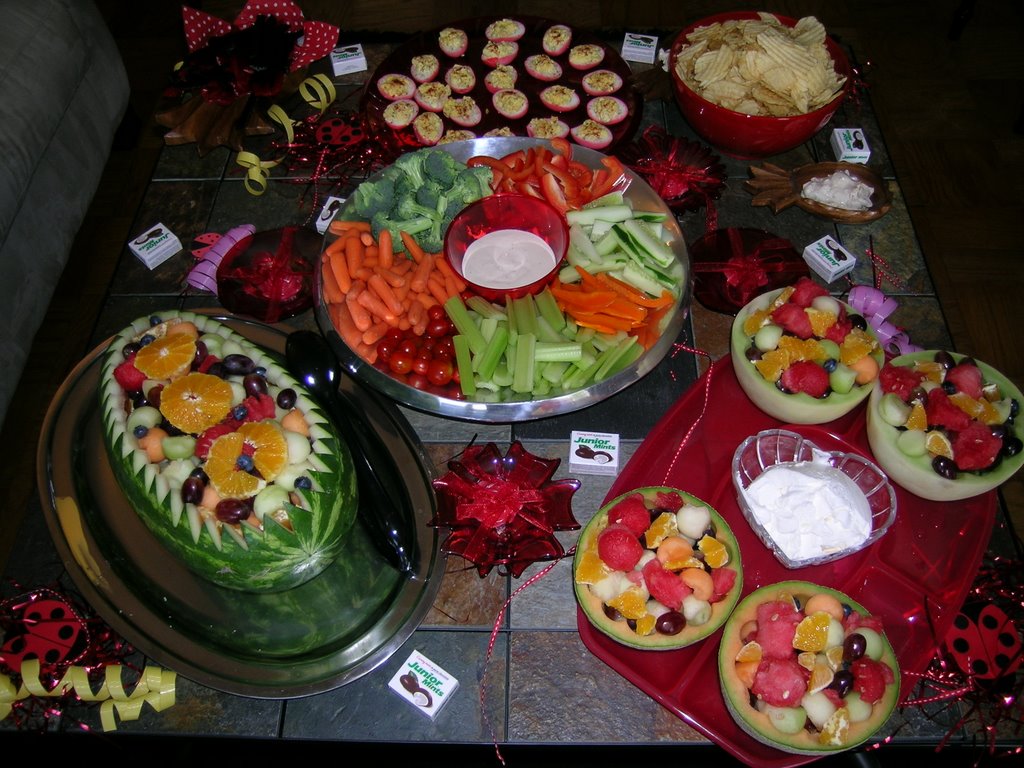 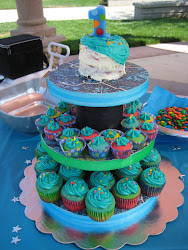 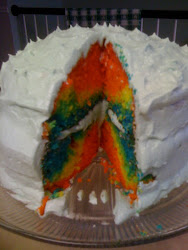